Looking back, I should really have set an alarm to remind me to update this blog more regularly. The last post was at the start of the German tour back in April, and then… nothing. Well, the German tour went really well. I played a few of my favourite places and shows, met lots of great people, and had a whole tonne of fun. Belated, but in no way diminished, thanks to everyone who ran a show, came to a show, and of course to Gareth who helped with the driving, sound-engineering, and general morale-boosting.

In truth, there hasn’t really been much to report between the end of the German tour and now. Due to a few circumstances, I’ve been in a motivation-less pit when it comes to doing this ‘music’ thing. There’s really only so many times you can be knocked down before you start to question whether you want to get back up again.

So, I’ve taken a couple of months hibernation away from the last 9-years of continual gigging, show-booking, song-writing, recording, and generally being Dave Hughes the Musician. The next proper shows aren’t until the end of July, but aside from that (and a very short return to Germany in September), I’m not exactly sure what will happen after that. If the German dates go well, which I am in no doubt they will, then it’ll be nice to go out on a high.

Don’t get me wrong, I have endless gratitude for everyone who has supported this little project of mine, from buying albums, coming to shows, booking me for gigs, and general support when things haven’t gone that well. From concerts in New York City to the Barrowlands in Glasgow, I’ve achieved more with this project than I ever thought I’d be able to through music, yet still I have this feeling that it is reaching its natural conclusion or that I’ve outstayed my welcome in whatever scene that I’ve tried to inhabit.

While the number of solo shows and recorded output will drastically decrease in the months to come, I’ll be increasing the amount of time I’m spending on the Different Circle record label. We’ve signed a few great acts for records to be released in the coming months, and I get to play a few songs here and there at the regular monthly acoustic night (even if I don’t class that as a ‘Dave Hughes’ gig). I’ve also got my place in Rob Duncan and The Side Effects as second-guitarist to satiate my need to play electric guitar.

In short, it’s not the end but you’ll be hearing less from me after September 2015, and throughout 2016, but please keep your eyes on Different Circle (website, facebook, twitter) for all the interesting stuff we’ve got coming there.

For the moment, the last shows of 2015 are listed on the Gigs page, with some more German dates, and possibly a Different Circle Christmas Show to be announced. 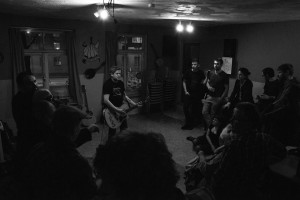