One of Emma’s hobbies was photography and when she’d come to my shows, she’d normally have her trusty SLR with her. She had a real knack for capturing the fun aspect of my shows, and I have used her photographs for posters and CDs. In particular, the front cover of the ‘Rise, Again!” album comes from a photo that she took of me at a show in Cerberus. 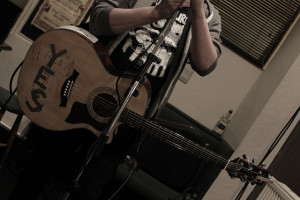 The photo that would become the cover of Rise, Again

On the day that the world found out that it has lost Alan Rickman, I received a call to tell me that Emma had passed away. We worked in the same building in Dundee, and when things were going really bad for me, she’d be part of my small group of close friends who would take me for a coffee or a beer after work. 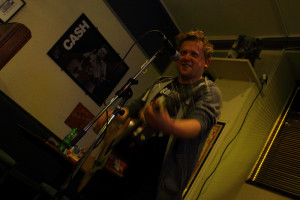 Cerberus, a photography by Emma, complete with my bad hair.

One day I mentioned that someone had passed me a YouTube link of “some guy” called Malcolm Tucker which I found hilarious. The next day, Emma arrived at my desk with every episode of the Thick of It (plus the film) so that I could get up to speed with the rest of the world.

To say that I’m going to miss her would be an understatement. 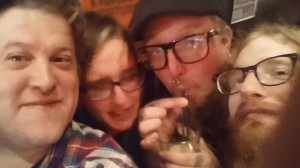 The RFPB with Emma. This is the only photo I can find of myself and her. Testament to her usually being the photographer and not the subject.