Continuing this series of guest posts about our upcoming tour, here’s old man of the road Adam Boucher (our lowly tour support for the first half) and his pearls of wisdom about life on the road. 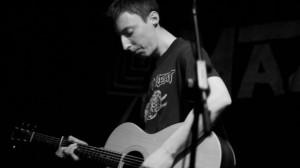 Touring is ace. Except when it gets a bit shit. But generally, it’s ace and you get through the shit bits and come out laughing on the other end. It’s certainly provided me with some of the best experiences of my life so far, even at the level I play at (i.e. mostly to nobody). Maybe one day I’ll get to combine the fun of touring with sizeable audiences and no doubt cream my pants in uncontrollable excitement.

Rather than blog about how much I’m looking forward to the tour though (shitloads, by the way) I thought I’d cobble together a list of pros, cons and general tidbits about the upcoming tour and tour life in general.

Pro: Tour in-jokes. It could be the being cooped up in a confined space for long periods of time, but the smallest things become hilarious. From the outside looking in, people on tour must look batshit crazy at times. It’s horribly cheesy, but a good tour creates a bond with the people you’re with that lasts for ages and creates it’s own insular world that carries on once the tour is over.

Con: Over-exposure to Bruce Springsteen on the tour bus. I don’t hate The Boss, but his music leaves me cold. I imagine Dave has plans to listen to his entire back catalogue while pretending we’re touring on the highways of the US (as we slow down for the umpteenth traffic jam/roundabout). I’ll have my iPod set to ‘A13 Trunk Road to The Sea’ just in case!

Pro: Touring with other real, actual humans. I’ve done quite a few tours on my own, in my Ford Fiesta. It’s an endurance test. Ultimately rewarding, but nothing beats having other people around to share the experience, not to mention the driving.

Pro: There isn’t a show in Hereford on this tour.

Con: I’ll be surrounded by Scottish people who’ll force me to cook everything in batter before I eat it, including no doubt, my own shit as tour hazing. Also, a nice cup of battered tea. Mmm, delicious. (this is a joke… partly).

Fun tour experience #127: Final gig of a short weekend run with a couple of other acoustic bods. After a day of bullshit from one of the other acts (including making me wait for over an hour when I was picking him up but instead he went walkies) I came the closest I’ve ever come to taking a swing at someone. If you know me or what I look like, you’ll know how ridiculous this is. We don’t really talk any-more.

Con: On every tour I’ve done, I hit a low point where I’m totally pissed off and rarely for any really reason. On my first tour with Dave, I spent my whole time in Newcastle in the foulest fucking mood. The show was great. The people were great, but for some reason I was just being a miserable cunt. Pity Dave and his band when that moment hits on this tour.

Fun tour experience #54: In Bristol, first night of my first tour, I was mistaken for Jim Morrison by a guy who was totally tripping his balls off. He bought my CD and had me sign it as Jim Morrison. I backed away quietly, whilst checking there wasn’t a copy of The Catcher in The Rye sticking out from his pocket.

Pro: Sing-a-long-a-Dave-Hughes. Every night I’ll get to watch Dave and his band and sing along, pretending they’re at Wembley. I’ve seen quite a few variations of the band and also Dave solo, but never the full electric band. I get that 5 times in a row.

Fun tour experience #491: Kings Lynn. A house show. Playing to three people and getting utterly destroyed. I rarely drink and I’m not one for drunken stories, but this was an exception. Utterly hammered, an awesome gig and I was happy to experience the next day’s hangover to have done it.

Fun tour experience #12: Googling ‘Vegan beer’ in an off license in Newcastle so we didn’t offend our Vegan house show hosts, only to find out that it wasn’t a Vegan house show. At least we were considerate.

Cons: Post-tour-blues. Inevitable and soul crushing. It at least stands as proof that you had an awesome tour though.

There are loads more, but I’ll spare you for now. Come and see us if we’re playing anywhere near you. We’ll be the ones who look strung out, smell a bit of ‘tour bus’ (the collected smells of 6 people living out of van) and are desperate for you to buy their merch as validation for their shitty life choices!