The last four gigs were a lot of fun for the band and I. We had a great time playing them and learnt a lot from them in their own little ways. Woody flies off to Florida next week for a holiday, and I move to Brooklyn the following week for three months. This means that RFPB is temporally on hiatus until at least November. We’ve written a bunch of new songs though (Luath St Stories being one that we’ve played at every show recently), and are planning a great wee EP to end the year. 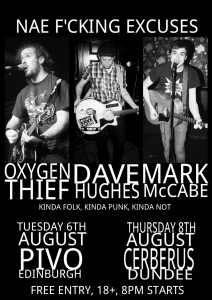 Before I head out to the states, I’m playing two solo shows in Edinburgh and Dundee with Oxygen Thief and Mark McCabe. Both are free entry and 18+, with doors at 8 pm. The line-up for these is fantastic and different, and so should be an amazing night.

Unfortunately, my gig with Larry and His Flask has been cancelled, but I’m told there’s a good chance of it being rescheduled for early next year.

One thing that I haven’t really mentioned on the blog is the RFPB bootleg collection. We’ve recorded our gigs for a while now, and in the absence of new studio recordings, we figured it would be fun to start making some of them public. There’s old songs, new songs, rare songs, and covers in them thar tapes. Check them out!