Influential and legendary folk-punk songwriter, and friend, Erik Petersen (of Mischief Brew) sadly passed away days before they were due to start their long-awaited EU/UK tour. There are many great articles appearing about his life and work. I was asked to write about what Erik meant to me over on the London Celtic Folk blog. My heart goes out to Denise, Mischief Brew, the Pugs, and the Petersen family. 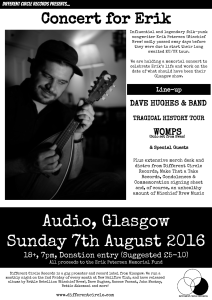 We are holding a memorial concert to celebrate Erik’s life and work on the date of what should have been their Glasgow show. All proceeds to Erik Petersen Memorial Fund, and we have organised a great line-up of myself (with a brand new folk band), Tragical History Tour, and WOMPS (Ewan Solo).

If it wasn’t for Fistolo (the label that Erik and Denise ran to release Mischief Brew records), there wouldn’t be our own home, Different Circle Records. They were an inspiration on how to run the label (along with Make That A Take Records), and we were lucky to work with Erik and Denise on releasing a CD version of the proto-Mischief Brew “Kettle Rebellion” LP.