I’ve got quite an exciting and busy week ahead this week. On Friday, I’ve been invited to appear at SNP Westminster Candidate Anne McLaughlin’s adoption night, which also includes speeches by Scottish First Minister Nicola Sturgeon and actor Tam Dean Burn (star of Taggart and compere of that time I played the Barrowlands). 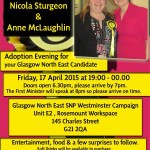 Full details are on the poster, although I hear that it is almost sold out already.

Saturday is then busy with two shows to be played. First up is an appearance at New Hellfire Club’s Anti-Record Store Day event alongside a whole bunch of amazing acts. I’ll be on at 4pm, and will have CDs with me should you want to pick up a copy of Rise, Again.

After finishing at the New Hellfire Club, I’ll be rushing in to the city centre to get to soundcheck for a show at The Vale (Queen St) with a band I’ve been playing second guitar for. The band is called “Rob Duncan and the Side Effects”, it’s a rough and ready country rock band. It has been pretty good fun to just have to stand at the back and play simple rock and roll chords under the noise, I’m looking forward to this show. Kicks off at 7pm and is £5 on the door.

Then next week, things really kick off with a Ferry ride to the Netherlands to kick off a run of European shows.