They say that Winter is the most depressing time of the year, so I said to myself “why not add to the misery and do some shows around the place?”. I’ve got a bunch of new songs to play, some old ones that have been moved to piano, and an itching to get up on stage for a proper concert again. 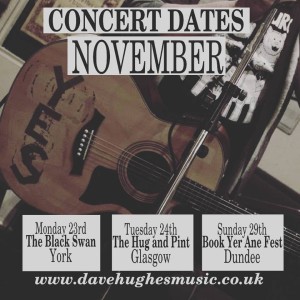 I’ll be playing a Warm-up show in York at the Black Swan with Bettie Akkemaai on Monday 23rd of November, before the two of us head up the A1 to Glasgow to join the wonderful Jud Harron for a show at The Hug and Pint in Glasgow. To finish off the week, Bettie and I will head up to Dundee for Book Yer Ane fest, both appearing on Sunday 29th.

Bettie Akkemaai is over in the UK for the anarcho-folk festival in London (21st of November), and also to record her debut EP for Different Circle Records. I’m in the producer chair for that, which is really interesting.

Finally, if you want to hear a track that didn’t make it on to “Rise, Again”, then I’m giving the chance to download.