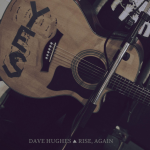 After a long wait, my new album “Rise, Again!” is out today via bandcamp and Different Circle Records. Ten tracks of personal-political folk music is the best way to describe it. It is streaming in full on the bandcamp page.

I’m really proud of the whole record, these are some of my strongest songs and I have to extend so much more gratitude to Gareth for making them sound as amazing as they do. I’d also like to thank Lisa-Marie Ferla who gives a fantastic duet on the track Bleecker St (she takes the lead verse after the guitar solo, check it out!), and the multitude of folk who came along to add their backing vocals to the title track.

It’s definitely a solo record, but happily, at some points, it didn’t feel like it.

The album is currently being pressed for your delight and satisfaction. I would like to extend my endless gratitude to everyone who has pre-ordered a copy already, especially those who have continued to do so through out this long ‘Dave Hughes Music’ journey. That means a hell of a lot to me.

You can now listen to the track ‘Bleecker St’ on the bandcamp page, and also download it when you pre-order as an added bonus alongside “Freedom of Something”. Bleecker St is the ‘pop’ hit of the album (perhaps alongside Secret Agent) and features the wonderfully supportive Lisa-Marie Ferla on backing vocals (keep listening to the end for her solo verse, it’s magnificent).

Here’s a track by track description of the album, to give you an idea of what to expect when it is released on the 30th of March.

Joe Strummer’s Black Cars
This is a song that I used to play with my Greenock punk rock band “DNR”, written one night back in 2003 after watching The Clash’s docu-film “Rude Boy”. You can listen to this track on Youtube.

Uncool Mental Health
I told myself that I wasn’t going to write about mental health problems on this record, but this song’s treatment of depression and alcoholism was too interesting to put to sleep. This is the first song that I’ve ever written that explicitly uses an old fashion drum machine instead of a live drummer.

Bleecker St
I’ve been lucky enough to return to New York in the past year. While I only spent three days in the city, I was able to retrace the steps I took when I lived there and found everything that I needed and loved. I was going for a sound similar to The Wallflowers (Bob Dylan’s son’s band) with this one. I bought an 8-track for demo’ing songs at the end of last year and this was the second song I put together with it. The other, called Sleepwalker, wasn’t finished in time for the album but is definitely something I’ll return to in the future.

A Thousand Words
I originally set-out to release a re-recorded version of my 2008 record ‘Connections’. When we tracked ‘A thousand words’ we took a step back and realised that it might be the starting point for something new. This song is dedicated to my maternal grand-parents and takes a look at how much the world has changed since the summer of 2001.

Rise, Again
My pro-independence rallying cry. I’ve written a lot about it before, so I’ll only mention that you can listen to it on Youtube.

Secret Agent
An experiment to write a country rock song with nonsensical lyrics written after reading an article on how rappers formulate their lyrics. Ended up being a fun demo that we couldn’t really put aside. Has a great guitar sound in the solos.

In the Modern World
The other track left over from the ‘Connections’ settings, and also a B-side for the As You Are single back in 2011. This track has a slightly different sound to the rest of this record, purely because it started out as a demo to try out a folkier sound for the song (including an on-the-fly, first take harmonica solo) that ended up being something really special. Think Christy Moore singing Evan Greer or something.

High Fidelity
Perhaps the only true love-song on the record. Written for my wife around about the time of our wedding. Originally released on the 7-songs demo tape, but then hidden away in a shoe box until the last day of the Rise, Again sessions.

Live off the Dead
This track originally appeared on Connections but in a much more acoustic nature. With this recording, Gareth convinced me on the merits of drum machines, delay filters and other electronica. It has ended up being a noisy electro-punk affair, and the best way to finish the album.

I released the video for Rise, Again! on Monday through YouTube and it looks like it has been pretty well received. Which is nice since I’m really proud of the track from its writing, to recording, and filming. The pre-order for the album is open now.

I started writing the basic lyrics to the song around the end of August 2014, with the Scottish Referendum looming in the near future. It started out as a reflection on the journey from a 20% chance of a Yes vote to 40% and beyond. The following week, a 51% poll was announced and I decided to shelf the song. Unfortunately, as we know, the 51% didn’t materialise, pipping out around 45%. I’d started recording the new record around January of this year, and while going through my folder of recorded demos, I came across a very rough sketch of the track.

It was a very slow, finger-picked, Dylan’esque folk song with a campfire feel. Just vocals and guitar, with a bit of harmonica. I had recently bought an 8-track for demo’ing new songs with a drum machine, and so I revisited the song and built it up to a demo of what you hear on the track now. Once I gave it to Gareth (who is producing and engineering the record), we played around with tempos, lots of guitars, and have maybe recorded it three times from scratch (hello, demos and outtakes compilation for 2016!).

Once we had a version that we were happy with, we decided to get a group of people together to add their backing vocals for the ending. Gareth, and his lovely wife Lynne, threw a house party at their place and we invited a bunch of close friends around. It was also here that we recorded Lisa-Marie Ferla’s duet for Bleecker St (which sounds amazing). A few bottles of wine, beer and whisky later, and we had the chanting recorded.

After we had mixed the track, I booked The Blue Chair in Glasgow for the video shoot. It was to be a small acoustic gig, with a support act (the wonderful John Mackay), free booze and a party atmosphere. We fell short of managing to re-create the atmosphere of the recording party, but it ended up being an amazingly fun night. I mimed the track a few times alone while Gareth filmed, then gathered the attendees closely around to make it look like “the best gig ever(TM)”, and mimed it again. Finally, I played an hour set of old, new, borrowed and blue songs. Including the first ever “Dave Hughes” performance of Billy Connolly’s “if it wisnae for yer wellies” outside of a Primary School.

Naturally, it would have been nice to have a few extra bodies on the night, but I think we managed, with crafty editing skillz, to commit the atmosphere of a ‘good gig’ to film.

Hell, I’m even running a monthly night at The Blue Chair now. First is on the 10th of April. Before then though, I’m supporting Franz Nicolay at the 13th Note in Glasgow on the 15th of March.