I’m making many more videos for the tracks on the new album. There’s already one for Freedom of Something that is playing on my Youtube and Bandcamp pages, and I’ve got another in the process of being put together for Strummers Black Cars. However, here’s where you come in: On Friday 27th of February, in Glasgow, we’ll be filming a live’ish video for the title track “Rise, Again” at The Blue Chair (High St, Opposite from McChuills). 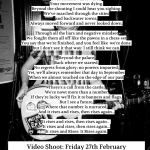 The Blue Chair is a small independent cafe in the heart of Glasgow, and a strong supporter of independent music, performance, and political campaigning. It makes sense that we use it to make a video that is part bothy-singalong and part political rally. It’s a very small cafe, and we’re looking for it to be packed and so we would love it if you could join us.

We’ll provide some drinks for your trouble (although, feel free to BYOB), and the kitchen will be open should you want to grab some dinner. We’ll have a donations bucket to go towards corkage (and the cafe for providing the space for us to use), and it’s all ages, so if you have kids you can bring them along. I’ll keep the swearing to a minimal level (if at all).

Frequency Asked Questions (if this happened frequently)
1. What will this involve?
We’ll kick off at 7pm with music from John MacKay (americana, Lucero styled songs), and then we’ll start filming. This’ll involve a few takes of me miming along to the backing track while being filmed from different angles.

2. How much will I be on film?
Depends on if you sit down the front, or dance about at the back. The main focus will be ‘me’, obviously, with crowd shots so that it looks like a pure dead brilliant gig.

3. Why are you doing this?
Because I want to, and think it might be a fun way of getting the song out there.

4. I voted No, can I still come along?
Yes, absolutely, preaching to the converted gets us nowhere.

5. I voted Yes, how can I be absolutely sure that the politics of the song match my political ideals?
The lyrics are in that picture up there.

6. Is this just a way of getting people along to one of your gigs?
Well, obviously I’ll be playing some songs for the people in attendance after the filming. However, there are much easier ways to get people to gigs without asking them to be filmed! (The free drinks should help though…)

I’m happy to announce that my new album will be called “Rise, Again”. It will be coming out on 30th of March through Different Circle Records. The pre-order for the album is open now at the bandcamp page, and you can watch the video for the first single “Freedom of Something”. I’m doing lot’s of shows around the UK and EU to promote the record, check out the dates on the Live page.

If you like the track, please share it around with your friends. That would really help me out a lot

If you hate it, may I recommend this handy link.