As we near the dawn of 2015, I thought it would be nice to look back on 2014 and the activity of RFPB-land. It was an interesting, eye-opening, year that might not have reached the heights of 2013, but still has plenty to look back on in years to come.

January started with the recording of the Doctors and Dates album. We locked ourselves away in the Bones and Smithereen’s tattoo studio with not a single electric heater to fight off hypothermia. With frozen fingers, Wetherspoon dinners and red light syndrome conquered, we left with seven tracks recorded live in the studio. 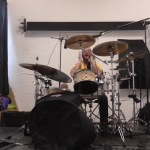 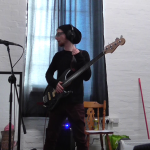 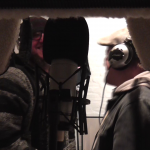 February saw the mixing and mastering of the album under-way and the return to playing live shows again. Starting off with an intimate show at McPhabbs with Gaz Brookfield, Joe McCorriston and The Lonely Tourist, and ending with a massive show at The Barrowlands. I was booked as the opening act of the Clutha Memorial concert, which was set up to raise money for the survivors of the Clutha disaster in Glasgow. I was booked as a solo act but decided to take Woody along for the ride on cajon. We even ended up on the six o’clock BBC news bulletin which classified us as ‘artists’.

We released the Doctors and Dates album in March and set out on a small UK tour to promote the record, hitting Glasgow, Dundee, York and London. Some of these shows were among my favourite RFPB shows, others just didn’t hit the mark and forced me to re-evaluate what the hell we were doing at times.  The press seemed to like the album though, with Louder than War stating “this record is a must for anyone who is keen on the early days of Green Day, the later days of the Clash”. That made my day.

In April, I set out on my first ever continental European run of shows which started in the Netherlands before heading to Germany. There were some hefty drives on the route, so I brought my right-hand man Gareth along to help. This was by far my favourite episode of 2014, and really helped to re-ignite my love of playing acoustic music to people. We had massive nights in Den Bosch, Dortmund, Essen and Karlsruhe, ending with a subtle but emotional night in Aulendorf.

The RFPB regrouped in May and June for bunch of our own shows around Scotland and then a few dates with the absolutely wonderful Chris Devotion and the Expectations.  I also found some time in August to do an English weekender of solo shows which, while still having a lot of fun, showed the stark contrast between playing in the UK and mainland Europe.

At the end of August we had the privilege of performing at, our producer, engineer and mixer, Gareth’s wedding to Lynne. I played a few songs at the ceremony (Dancing Two-Step and As You Are), and then we turned the volume up for a night of rock’n'roll covers to start the dancing. That was perhaps my favourite night of the whole of 2014, and I was beaming with pride to have been asked to be involved.

A work trip to America in September gave me the opportunity to play a lovely show in the Upper West Side in Manhattan at the West End Lounge. This means that in 2014, I played shows in five different countries, which isn’t bad (out of a total of 34 shows throughout the year).

Back home, the rest of September and October were concentrated on putting on a massive Five Year Birthday show for the RFPB (which was oozing with hubris and narcissism in equal measure). The show (and the weekend of gigs prefacing it) went as expected and those who showed up to play and watch seemed to have a great time. We raised a decent amount of cash for the Scottish Association for Mental Health and gave the RFPB the send off it deserved before it’s hiatus while I concentrate on a solo record for next year. I’m sure we’ll do one or two RFPB shows in 2015, but we are all very much in need of a little break to concentrate on the aspects of life that get in the way of a great rock’n'roll band.

At some point in the Autumn (my memory is failing me at the moment over which month) I recorded a full solo record of just me and guitar. I was ready to release it but then had second thoughts and decided to trim it down to a three track EP, keeping some (but not all) of the other tracks for a different project. The three track EP was released in November, with an acoustic version of Doctors and Dates as the A-side and two older songs as the B-side.

I finished the live gigs of 2014 with two amazing gigs that were run by the Make that a Take collective. The first was a late night show in Glasgow that served as an after-party for the Against Me! show that was taking place that night. I was a late addition to the gig due to a drop out, and I was going to the gig anyway so I figured there was no harm in offering my services. My last gig of 2014 (unless I happen to play sometime in the next 4 days) was at Book Yer Ane Fest in Dundee on the Acoustic Stage. This is always an amazing part of the punk rock calendar for Scotland, and I am always left feeling very honoured to be a part of it.

And so, there we are. Onwards to 2015. I am in the middle of recording a new solo album which, currently, doesn’t sound entirely like a Dave Hughes record. I’ll write more about that in January when I’m ready to release the first single from it (hint: it fucking rocks). I have also started to put together a few UK dates for March and European gigs for April.

I can’t wait to get back up on the horse with it all.

The sixth of December seems like as good as any time to run down my top five albums/songs/gigs of 2014. I don’t think I’ve bought as much music in any previous year as I have this year, but this isn’t a measure that 2014 was best or music, more that I had more spare time and cash to be able to do so. Links are provided for DIY releases where the money goes direct to the artist/distro, for all other go to your normal digital stores (iTunes, Amazon etc).