The weekend began with a drive down to Greenock on Friday to collect Woody and the RFPB backline. After a few months away from  gigging, we were a bit out of practice in the game of Roadie Tetris. So, by the time we made it to Glasgow Dan had the challenge of getting his remaining gear (and himself) into the car for the ride to Dundee. A quick stop-off at the now, and growing, familiar Perth Broxden McDonalds, we made it to Cerberus Bar to load-in for the evening’s show. The Friday and Saturday shows were a bit different to the usual punk shows that we usually play in that for these ones we were the only act on the bill, in full pub band mode to play a mix of (mainly) our own songs and covers. END_OF_DOCUMENT_TOKEN_TO_BE_REPLACED

Celebrating five years as a band, Different Circle Record’s signing DAVE HUGHES & THE RFPB are headlining a charity benefit concert in Glasgow at The Old Hairdressers on Sunday the 26th of October. 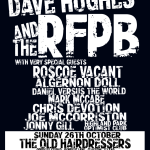 The concert will feature many stars of the Scottish music scene including Algernon Doll (Struggletown, Badge of Friendship), Chris Devotion (Armellodie Records), and Mark McCabe (Cat’s Aye! Records). The line-up is curated by Dave and the RFPB and brings together many acts that have shared bills and concerts with them over the years.

Dave says “We realised that we had been, for better or worse, together as the RFPB longer than most of our other past bands had survived and it would be a good occasion to have a party. And if we can raise some money for a great cause then all the better“. Profits from the day will go to the Scottish Association for Mental Health.

Tickets are on sale now through Brown paper tickets: http://five-year-rfpb.bpt.me

“We’re also well aware that many of the acts who have agreed to play have gone on to greater artistic and critical success than ourselves, so there is a large amount of hubris and ill-advised ego attached to headlining the event“, he continues, “but what the hell, it’s our party and we’ll headline if we want to“.

Prior to the all day benefit, the RFPB hit the Scottish Highway to play shows in Dundee (Cerberus, 24th October) and Inverness (The Eagle Inn, 25th October).