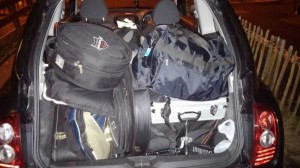 At this time last week, Dan and I were trying to fit a not insignificant amount of gear in to our Nissan Micra-cosm. Then, the next day, we set off at 5am to collect Woody from Manchester Airport to begin our English weekender of Devizes, Manchester and York.

We arrived in Devizes around half two and promptly got lost around the Cotswold Market town until finding a municipal car-park, and latterly the venue. After a while, the gig started to manifest itself in the upstairs room above the pub. We met the man behind Sheer Music, Keiran, and he rapidly endeared himself to us as one of the nicest promoters we’ve worked with. The gig itself went really well, better than most ‘first visits to a new town’ go for us and we’re looking forward to getting back there. I’ve attached a few videos below. 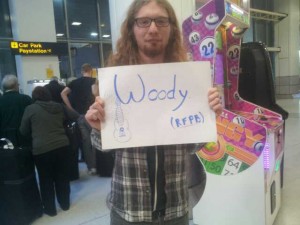 We weren’t able to fill our day off for the next day, so we took an RFPB road-trip up through the middle of Wales to my parent’s place in Dolgellau. There, we had planned to record a Christmas EP and practice some new songs, but instead we drank beer and watched Harrison Ford in The Fugitive and read the 1968 Guinness Book of World Records.

The next day, we drove to Manchester to get ready for the evening’s gig at TV21. After checking in to the world’s worst (but clean) Travelodge, we met with the promoter, Ian, who led us up to the venue. Things were slow to get set-up but in the end, it turned out to be a very fun gig including the loudest sing-a-long to As You Are that we’ve ever had south of the border. Other towns have to up their game.

Then we went out and had a night on the tiles in Manchester, on a Sunday. It worked, and I felt really awful the next morning for our session with the Anthony Burrito-Hunter Barlow for The Ruckus (should be up soon). A short drive later, and we were in York for the evening’s gig at The Black Swan. This is one of our favourite venues in the country, and love it so much that we decided to book a room there rather than another travelodge.

After eating some fantastic food in the venue’s restaurant it was time to play the gig. A really good bill of supports had been put together by Craig consisting of Fool’s Mate, Jonny Gill and Tom Sillito. We did our headline show and afterwards sold out of all remaining copies of In Death Do We Part?, and a whole bunch of T-shirts. It was, to put it lightly, an amazing night. Afterwards, we had a few more drinks in the bar with the landlord in front of a roaring fire before retreating to bed for the night. Then we came home and crashing back to our normal lives.

It was worth every last mile.

Next up are a few more gigs to end the year: