After 12 months of recording, mixing, arguing, re-recording, sequencing, re-mixing, mastering and more arguing, the album is finally out for your listening pleasure.  Featuring 12 brand new recordings all in stereo fidelity, In Death Do We Part? is an album I’m very much proud of.

Influential american music blog, The Ruckus had some very nice things to say about it, and you can check out their review here. As more reviews come in, I’ll be linking to them on Twitter and Facebook.

We were supposed to be having a launch this week, but due to a number of things, this has been postponed to the 11th of April at Roxy 171 in Glasgow. We’ve also had our Camden gig with the Indelicates moved from the 27th of March to the 25th of April at the Camden Head. Full details are on the gigs page for both gigs.

Also, on Wednesday, 20th April, I’ll be a live guest on the Scottish Fiction radio show at 9pm. You’ll be able to listen live through radio in Glasgow (98.4FM), online at the Pulse Radio website, and then also later via the wonders of MixCloud. I’ve been a listener to this show and podcast for a wee while now and am really excited to finally be a guest. Tour stories, live performance and some choice songs chosen by me!

FInally, Mr Boucher of Adam Boucher fame put together a wee 9 minute tour video from our tour. Check it out below.

I’m currently sitting at my desk at work, looking back over a 10 day trip around Scotland and England. We are thankful that the gigs themselves were very enjoyable, only one bad one out of eight is a good score for us. Many thanks to every promoter who put us on, and to everyone who came along, sang, clapped, bought T-shirts and CDs. That was amazing. Our bassist Dan has uploaded an album of candid behind the scenes photographs here. 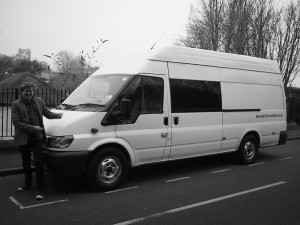 Also, many thanks to everyone who played the shows with us. That includes (in rough order of shows) Adam Boucher, Turtle Lamone, Highland Park Optimist Club, Davey Nolan, Emma Hallows, Joe McCorriston, Nic Wood, Young Property Developers, Noodles, Unfinished Drawing, and The Nameless Three. Special mention to Paul from Highland Park who jumped in the van with us after Edinburgh to help us out with loading equipment in and out of the venues in England.

There’s a few things coming up, but first I need to mention that the Camden gig at the End of March with The Indelicates has been moved to the end of April, full details here. Tickets are still valid.

Next week, I’ll be appearing on the Scottish Fiction radio show to choose some music,  play some songs and chat about things like music and the tour. You can listen online live, or latterly through mixcloud.

Oh, and the RFPB album “In Death Do We Part?” is released a week today through our bandcamp page. Have you pre-ordered it yet? (every CD we sold on tour has a download code that’ll get you the album).

And, if the music industry has its wheels in order, I’ll also be able to announce two amazing Scottish shows on Monday.

Right, I’m away to make amends.