We come to another end of another year. Parts of me are really happy to see the back of 2012, but there are still bits of it I’ll have a fondness of. In particular, releasing our As You Are EP in August and hopefully getting people excited for the much delayed album, which is definitely coming out soon.

An end of year post wouldn’t be the same without a couple of top 5 lists, so here’s the Dave Hughes Roll of Honour

All in all, 2012 was quite a quiet year for me and the band (only 24 gigs played as opposed to 45 in 2011). Too much focussing on getting the album finished and not enough playing live. We really hope to fix this in 2013, with the album coming out end of February and a tour being in the process of being booked. I’ll be announcing some dates in the middle of January

And finally, I leave you with a wee Christmas EP that I released last week. Five songs that I found lying about my laptop as unfinished recordings of covers. Nothing special, but I’m pretty happy with it.

In to December now and almost at the end of 2012 (did anyone have a truly fantastic 2012? I doubt it). No doubt you’re all worrying about what to get your loved (and not so loved) ones for Christmas? Well, here at RFPB towers we have a small range of goods you might like. Head over to our Merch section on the Bandcamp page to browse our warez. 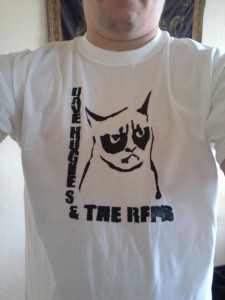 The most recent addition is this fantastic DIY spray-painted T-shirt featuring what I think is the feline embodiedment of myself. Up until Tuesday you can get the T-shirt, a ticket for Tuesdays gig and a copy of the As You Are EP all for a tenner.

In other news, I donated a cover of the Pogues hit Fairy Tale of New York to AyeTunes’ Musical Christmas advent calendar, you can check it out here. Woody, Adam Boucher and Jonny Gill formed a choir and did backing vocals for me, it’s special in its own little way.

And finally, here’s a wee reminder about our headline show on Tuesday at The 13th Note in Glasgow, it’s going to be a special night. Mark McCabe, Turtle Lamone and Daniel Versus the World all on the bill. There’s still tickets left and can be bought from here: http://www.wegottickets.com/event/190163