It has been a long time since the band and I have played a proper gig in Glasgow. I’ve done a couple of solo gigs here and there, but the time has come to play with the band again. We did a really good and fun show in Greenock last week (and I did a run of fun solo shows before that in Dundee and Edinburgh).

So, without much further ado (as Shakespeare would say), here’s the details that I have at the moment. We’re coming back to the 13th Note on the 4th of December at 8pm. There will be two supports, one is the amazing Mark McCabe who I’ve played a lot with recently for both of our sins. The other is the equally wonderful Daniel Versus The World from Newcastle.  Last seen in Glasgow supporting Beans on Toast with me, his return has been very overdue.

As with our last Glasgow gig, we’re doing everything ourselves including tickets. This means that we’re doing the Buddy Ticket Scheme again since it worked pretty well before. Single advance tickets are £6, but if you buy one of the Buddy Tickets it’s £10 and that gets two people through the doors. There’s only 20 of those though, so best hurry. You can buy both types of tickets here: http://www.wegottickets.com/event/190163 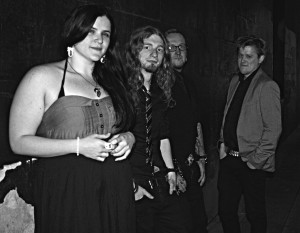 So, a wee bit of information about what the Renegade Folk Punk Band are doing on Friday. In short, we’re road-testing a lot of the new album and some older songs with new, rockier, arrangements. To bulk up the sound, we’ve got our good friend of the band (and record producer) Gareth adding acoustic guitar on some of the tracks. Gareth plays with Hearing Voices Movement and is no stranger to playing live music.

I’ll be mainly electric guitar in the RFPB for the moment. This is mainly because the album has a much more punk rock, loud, electric sound than my previous records. I’m sure at some point in the future I’ll switch back to acoustic for the band, but for the moment that’s where my heart is. There’s a couple of acoustic songs on the album, which I’ll do on acoustic live, but mostly it’s more Dropkick Murphys than Seeger Sessions. If that makes sense?

The other difference for Friday night will be our backing vocalist. Unfortunately Rachael can’t make it down to Greenock due to other commitments and so we’ve had to find a replacement. ‘Stepping up to the plate’ is my second favourite Lisa-Marie, Lisa-Marie Ferla. More commonly known on the internet as blogger Last Year’s Girl. Lisa has sung with me a couple of times, nearly always spontaneously and after Sunday’s rehearsal I’ve every confidence that she’ll pull it off nicely on Friday.