Just a very quick post to say that the album is now released and you can get your copy from the Coporate Records website. I’m dead excited that it’s finally out (and I can stop fiddling with the mix etc). And plus, Woody did the artwork which is ace.

It’s a sliding payscale, so you have a bit of control over what you pay for it. It’s six tracks, and I hope you find some enjoyment in it!

Right, my head is almost back together after a wonderful weekend at 2000Trees festival. Rather than giving you my own recap, I’ll instead give you a link to my wife’s blog. It’s a nice photo-diary of the trip. Absolute major kudos to Gareth for stepping in as driver (and harmonica tech) for the show.

On to more pressing business. It would appear that the UK tour starts tomorrow in Edinburgh. All the gigs are listed on the gigs page (with facebook events, maps, tickets), so check that out if you fancy coming to see me and Ciaran Lenehan play some songs. From memory, we are hitting Edinburgh, Full Throttle Festival (nr Newcastle), Manchester, Bristol, Tipton, Brighton, Cardiff, Great Barr (nr. Birmingham), Nottingham and Camden.

And finally, the album is finished. I’m dead pleased with it and really can’t wait for you to hear it. You may have noticed that there are more menu items up there on that menu bar. Under the ‘lyrics’ section you can find all the lyrics that are on the new album, along with a couple tracks you can listen to. Once the album is out on the label website (on Monday!), I’ll place a player to the full thing there too.

Thus it’ll become the Despite the Blackout page.

Right, I’m away to pack. And obviously, the answer is that you say Ballet. 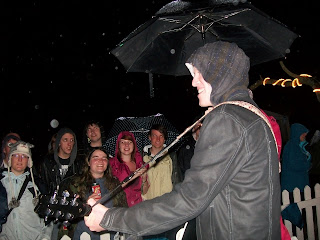 Seems like an age since I last posted here, but it has only really been 10 days or so. Since then though, two major things have been put in front of the band and I.

First up, on Friday we are ecstatic to announce that we are playing the wonderful 2000 Trees Festival.Just look at the line-up and you’ll see why we are over the moon. We’ll be on the Greenhouse Stage at 13.20 on the Friday.

Secondly, in a strange turn of events last night, we can announce that we are supporting the awesome band The Wonder Stuff at their Glasgow show in October. This takes place on the 27th of October at the newly opened Apollo 23 (on the site of the original Apollo venue). Full details and ticket links on the gigs page.

Looking back now, this weekend was a hell of a lot of fun. Started on Friday evening at the Captains Rest with Billy Liar and Louise Distras for a night of acoustic punk rock. A nice wee audience made up of friends and punk rockers all having fun, that’s what it’s all about.

The next day was off the scale though. I mean, just look at this photo: 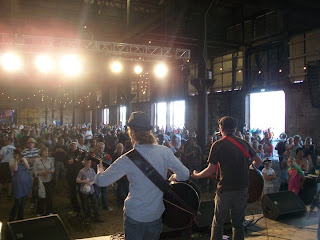 The renegade folk punk band at the Tall Ships Festival, taken by This Girl is
That’s us playing in front of around 500 people in the Sugar Sheds down in Greenock for the Tall Ships Festival. I had some amount of panic when Dan and I went to meet Woody in the venue before our set. How would such a large audience, made up of people who had never heard us, feel about hearing 30 minutes of renegade folk punk. Especially since we were missing Jud who usually brings the more mainstream pleasing sound to the band.
In the end, it went very well. Dancing, singing along, smiles, and some well deserved beer in the summer sun. We even played a brand new song called Mirrors, which you can hear here.
This feels good. 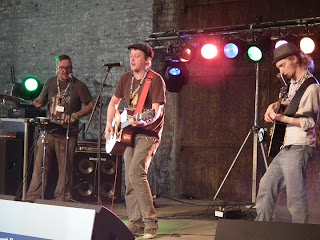